The chikungunya virus infects people through the bite of a mosquito. It is not contagious and does not spread by touch. It causes fever and joint pain. Chikungunya is rarely fatal, but for some, the symptoms can be severe, long-lasting, and debilitating. For some individuals, the symptoms may last for years.

Once considered a disease of the tropical countries, cases have now been identified in more than one-quarter of the countries on earth, including America, Europe and the Carribean countries.

The chikungunya virus is predominantly transmitted by a bite from an infected female mosquito. In general, it is not considered contagious; however, in rare cases, the virus can be transmitted through contact with an infected individual’s blood. (1)

While not as dangerous like the other mosquito-borne diseases, it causes high fever, joint pain, dehydration and weakness in affected persons- and in some cases, the back pain becomes so severe that patients walk bent over like hunchbacks.

It is a vector-borne disease caused by the chikungunya virus. The disease primarily occurs in the tropical and sub-tropical regions, but cases have also been reported from the USA and Europe. (2)

Every year, nearly 3 million people are affected by this mosquito-borne illness. The disease takes its name from Kimakonde language, where it means “to become contorted”. This refers to the stooped appearance of the patients infected by chikungunya. Most people suffering from chikungunya develop severe joint pain and appear to be hunched as a result. In severe cases, the joint pain lingers even years after the victim had contracted the chikungunya virus. (2)

Mosquito bites cause chikungunya. The typical carriers of the disease are the mosquitoes Aedes albopictus and Aedes aegypti.

The disease was first reported in Tanzania in East Africa in 1952. (2)

This is a disease common to the tropics and sub-tropics. But since the end of the first World War, it has also spread to places like Europe and the USA due to increased migration and international travel. (3)

Like all vector-borne diseases, chikungunya thrives and spreads faster in areas of humidity, heavy rainfall and frequent water-logging.

The disease is transmitted to humans when an infected mosquito bites a person. Mosquitoes act merely as carriers of the illness- they remain unaffected, but they pass on the virus to the people they bite. The virus incubates and releases into the mosquito’s bloodstream after some time, and after that, if the mosquito bites someone, the virus is passed on to him.

Chikungunya is characterized by high fever and joint and muscle pain. Many patients report getting rashes all over their body. Other symptoms include fatigue, nausea and headache. (4)

The fever is often biphasic- meaning it returns after breaking. The death rate for chikungunya is not very high- about 1 in every 1000. The very young, old, and those with other health problems are at risk of mortality. (5)

Chikungunya has the same symptoms of dengue, and the two are often mistaken for each other. However, unlike dengue, it rarely advances to a hemorrhagic stage. While it is debilitating, it is rarely fatal, and usually, the affected person can resume normal routine after 2-3 weeks. (6)

If you are suffering from high fever with severe pain and swelling in the joints and muscles, you should get checked by a doctor to ensure that you have not been infected by chikungunya.

The symptoms are the same as those of dengue. The newly arrived Zika virus also shows similar signs & symptoms. (7)

Here are the most common symptoms of chikungunya:

While not fatal in most cases, chikungunya is debilitating. The symptoms usually go away within 7-10 days. But in some chronic cases, symptoms may persist for a long time, and many patients complain of weakness and muscle pain even after the fever has abated.(8)

People who have lesser immunity, like children, the elderly and those with a history of arthritis or rheumatism are more vulnerable to the long term symptoms of this infection. (9)

Some patients suffering from chikungunya may exhibit long term symptoms after contracting the acute infection. Long term arthritis is especially a common symptom observed in these cases. This happens more to people of advanced age who have a history of rheumatic diseases. (10)

In acute phases of chikungunya, that is when there is much pain in joints and muscles, the virus is found to reside in those parts where the symptoms manifest. In the chronic stage, virus persistence is found to contribute to joint pain. (10)

It is not known clearly why these chronic conditions happen. However, studies have shown that chikungunya can leave infections within the hosts or patients for a long time- much later than the symptoms have abated completely. It is seen that one occurrence of this infection usually gives patients immunity for the rest of their lives. (12)

A patient gets infected when a disease-carrying mosquito bites him and the virus enters the bloodstream through the saliva of the mosquito. It is not clearly understood how the virus spreads through the human body.

Chikungunya is a non-contagious disease. It cannot spread directly from one person to another.  It also affects animals like birds, monkeys and other primates, and other small mammals. The carrier mosquitoes bite during the daytime. (15) 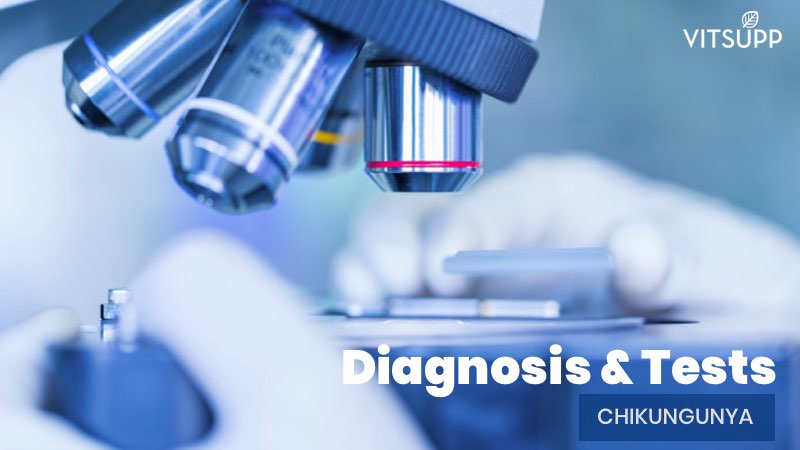 Chikungunya is usually identified by its symptoms. However, a laboratory test is required for confirmation, since it bears close resemblance with dengue. It is confirmed with the help of ELISA blood tests, that detect chikungunya’s viral RNA in a patient’s blood. (16)

For the diagnosis, two types of antibodies are tested: IgM and IgG. People who test positive for both have chikungunya. Sometimes, the IgM antibodies remain in the blood even long after the person has stopped showing the related symptoms. This is an indicator of past infection.

For confirmation, an IgG antibodies test is done within 5-10 days of initial detection. If the test results come back as positive, it indicates present infection. For those who exhibit borderline IgG and IgM antibody presence in their blood, it is recommended to go for a second round of tests after 10-14 days to confirm. (17)

The immunofluorescence assay technique (IFA) for identifying chikungunya is considered the best method available right now. It is is very accurate for detection and titration of the chikungunya virus (CHIKV).

Chikungunya tests can be somewhat expensive. 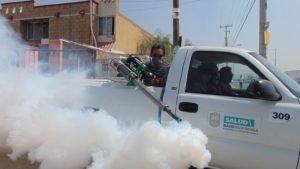 Since there is no vaccine or cure this infection, chikungunya prevention is the best strategy to prevent its spread.

It is best to see a physician if you have the disease, and the only thing we can really do is destroy mosquito habitats to stop the spread of the disease.

Mosquito bites can be prevented in many ways. Here are some of them: (19)

The other important step in preventing chikungunya is destroying mosquito habitats. Mosquitoes breed in places where water collect- like ponds, drains, broken tires, pots, tanks, plant tubs and other vessels. Destroying these breeding grounds is important.

Drain any water collected in these places. Clean your tanks and vessels for water collection regularly. Where water cannot be drained, use safe larvicides and disinfectants. Introduce larvivorous fish like guppy in ponds, lakes and aquariums whenever possible. (16)

There is no scientific cure for this illness. Chikungunya treatment is primarily symptomatic. As of now, no vaccine has been approved for it.

Doctors recommend getting plenty of rest and using non-steroid anti-inflammatory medicines to relieve pain in joints and muscles. Persistent pain may require long term therapy and application of analgesics. World over, many people have reported to experience pain in joints that they developed during chikungunya infection to last for years. In some cases, joint pain becomes so acute that the patient becomes bed-ridden. (20)

There are many similarities between chikungunya and dengue. The two of them are often mistaken for each other. Here are some similarities: (21)

However, while chikungunya symptoms may alleviate within a few days and are rarely fatal, dengue can advance into severe dengue fever and can prove to be fatal. Chikungunya does not turn hemorrhagic.

Chikungunya is rarely fatal but is a relatively common and debilitating disease. In tropical countries like India, which has a prominent monsoon and where waterlogging is a widespread problem, mosquitoes find many breeding places.

While there is no vaccine for it, we can prevent its spread by keeping our surroundings clean and destroying mosquito habitats. There has been a downturn in the number of cases over the years, and with consistent efforts, we may soon eliminate it.

Chikungunya in the world

In Hindi, Chikungunya is pronounced “chicken-gu-niya”. It is fairly common in India.

Q1. What is chikungunya?

Chikungunya is a vector-borne disease caused by the chikungunya virus. The disease primarily occurs in the tropical and sub-tropical regions. The common carriers of the disease are the mosquitoes Aedes albopictus and Aedes aegypti. (2)

Q2. What are the symptoms of chikungunya?

The common symptoms are high fever with severe pain and swelling in the joints and muscles. Some people may also suffer from rashes and headaches. Muscle pain can persist long after the fever has subsided. (4)

Q3. What is the relation between chikungunya and dengue?

Chikungunya and dengue show similar symptoms. There is a high probability of both being misdiagnosed. Both are spread through mosquito bites. However, chikungunya is not fatal like dengue, and does not result in hemorrhage. (16)

Q4. What are the tests for chikungunya?

Doctors may identify it from its symptoms, but a blood test is a must for confirmation. If a person tests positive for both IgM and IgG antigens, he has chikungunya. (23)

Q5. How to treat chikungunya?

There is no vaccine or scientific treatment for it. Doctors may prescribe the use of paracetamol to bring down the fever and give anti-inflammatory medicines and analgesics for pain in muscles and joints. Since chikungunya is very debilitating, lots of rest is required. (20)

Q6. What are the long term effects of chikungunya?

In some cases, muscle and joint pain can persist even after the fever has broken. People may suffer from rheumatic pain or arthritis even years after they contracted the disease. (10)

Q7. Where do chikungunya-carrying mosquitoes breed?

Disease-carrying mosquitoes breed in places where water stands for a long time. These include ponds, drains, water troughs, plant tubs, tanks, tires and vessels left in the open. (19)

Q8. How can I prevent chikungunya?

Since there is no vaccine for it, the best way to keep yourself safe is to prevent the spread of the disease. The most effective ways are using insect repellents, wearing long-sleeved tops and long bottoms, spraying insecticides and keeping your surroundings clean. (19)

Drain vessels that have water collected for a long time. Keep water containers covered and clean them regularly. Where water cannot be drained, use approved larvicides and disinfectants. In ponds and lakes, introduce larvivorous fish like guppy. (16)

Q10. How to make your home mosquito-proof?

Use mosquito screens for your doors, windows and balconies. You can use mosquito repellent vaporizers, mats and indoor insecticides. Use a mosquito net. Make sure that vessels for water storage are clean and there is no standing water. (19)

No. It cannot directly spread from one person to another, so it is non-contagious. However, a mosquito biting a chikungunya patient can infect another healthy person. It is best to keep a person suffering from this infection in isolation to prevent its spread.(19)

Causes of Sickle Cell Anaemia & All that you need to Know